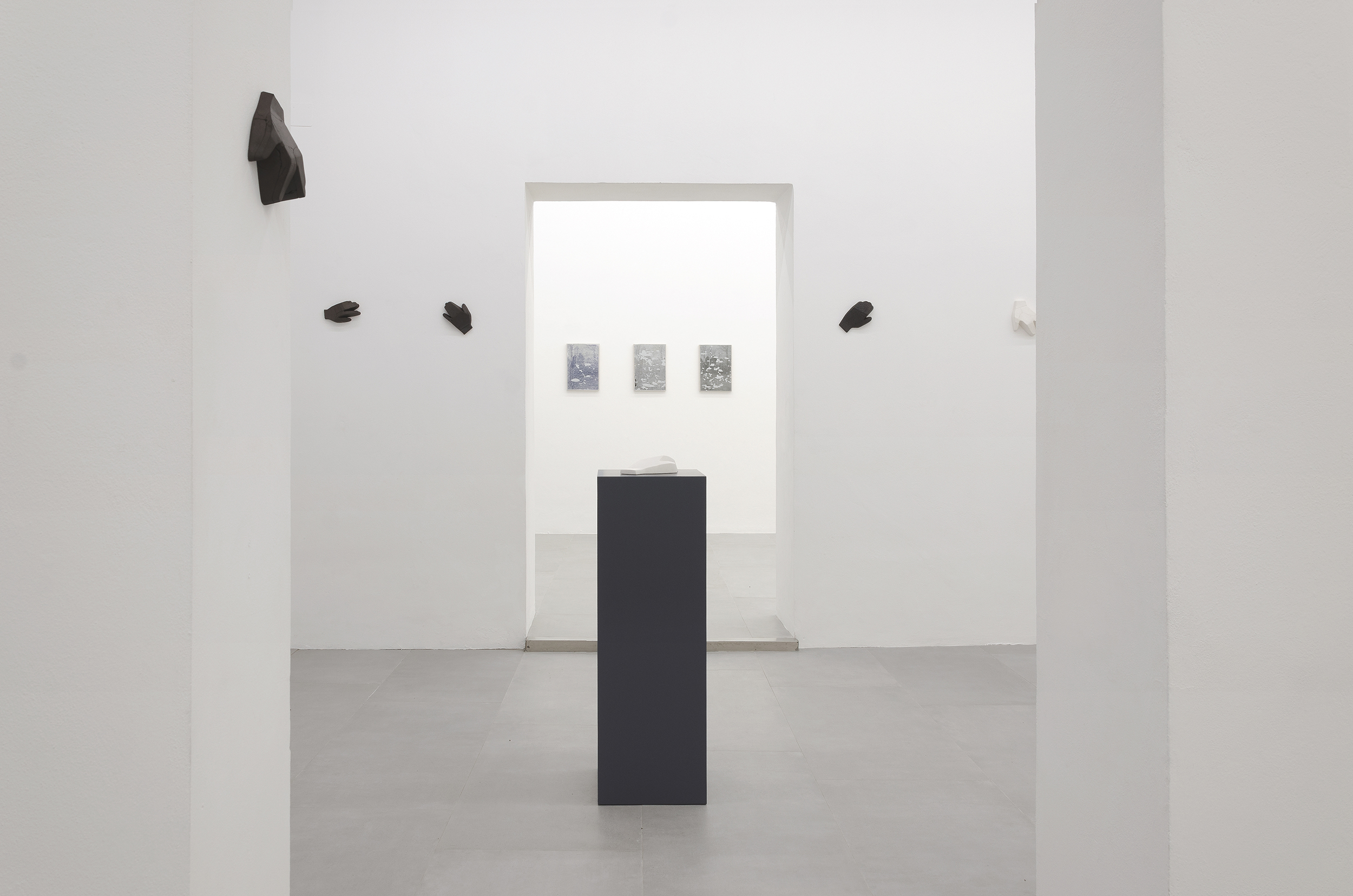 RizzutoGallery is pleased to present the bi-personal exhibition of two artists active on the national and international scene for some decades.

Antonio Catelani and Luca Pancrazzi date their first meeting and the beginning of a fruitful relationship of friendship and intellectual understanding since the time of the studies and the subsequent first collective exhibitions of generation that date back to the second half of the Eighties.

The exhibition is structured in two distinct cycles of unpublished artworks created for the occasion that will be placed in parallel in the wide spaces of the gallery. This exhibition highlights the way in which both artists, through a linearity of research conducted over time with rigor and always renewed experimentation, have maintained a rare coherence that demonstrates how in current works are always in place the theoretical assumptions firmly pursued since first works of many years ago.

Catelani presents a series of plastic works in amalgam of synthetic gypsum and black ceramic that, as in the sculptures that marked his beginnings, force the vision by creating a cognitive short circuit between what is perceived and the contingent reality of the artwork as a product. The statute of the Sculpture is de facto put in check by means of a paradox: an intentional forcing of the boundaries between drawing and volume. What is perceived by the senses does not satisfy the mind obligated to linguistic leaps and slips, imposing on the observer a further cognitive focus. The art object is therefore a “singularity” that imposes, on those who approach it, a theoretical exercise that finds its foundations in the thought and in the grammar of the art itself (“art as art “stigmatized Ad Reinhardt in the Fifties of the twentieth century). Between incongruity and evidence, now as then in the sculptures of the Eighties, the drawing and the plan become generative elements of volume.

The small sculptures exhibited here are created by a simple process of transposition and “materialization” of a silhouette drawing, previously obtained by tracing the profile of a real hand, of a specific hand different from any other hand. The first one was the left hand of the artist himself, and then of many others, among friends, colleagues and acquaintances.

The connection to the real is exclusively maintained by the silhouette  as a faithful “map” of the real hand. Cardboard, cut out and folded according to the drawn outline, is then filled with an excessive volume of material that not exactely takes into account the natural hand/model but, almost in opposition to it, self-represents and self-exalts as Volume and value in itself, rising to rank of “subject” itself.

The final “tri-dimensioned” form assumed by the work therefore appears incongruous, paradoxical. This artifice “scramble” the common image of a hand, as we all have it in mind. Subtracted from any descriptive naturalism or mimesis of the real, this sculpture becomes a source of multiple images and references of all kinds, and thus it appears in the shape of stone, rock, glove, paw, clod, animal, draft of bread … Likewise, multiple aesthetic references are generated, primitive, futuristic, archaic or, on the contrary, futurible, robotics and mechanics of a disassembled Golem. Finally, formal echoes of solemn Italic sculpture, of twentieth century “antigrazioso” and massive sculpture of the Twenties, as well as of comics design at Marvel… are all indistinct and co-present.

The manufacture of these sculptures, which almost seems to result from a mechanical 3D printing, follows in effect the classic process of calque or casting molds, giving volume and skin and texture to the finished shape, that now appears smooth and white, now corrugated and black like bucchero or piece of cast iron. These gypsum or terracotta hands play in analogy with real hands on which they have been shaped in the image and likeness.

Pancrazzi operates according to rhythms and cyclical times varied with an imaginary spiral-shaped progression which, going up from the already traveled point, because of its progressive nature, moves that point so as to create a close external vision. Therefore, he creates his artworks with a cyclic global meaning interpretable by following and reading the series that autonomously intertwine and unfold over time. The individual series are protagonists of a broader interpretive framework that could give the impression of participating in a planned production plan rather than being, as they really are, necessary steps for the metabolism of the organism that created them.

The artist never forgets the image, there is always an image of departure or arrival; even in the most abstract and formal processes, the image is always evoked and it remains anyway the protagonist, also in the works presented in this exhibition .

In “Paesaggi Ciclici Variati”, a cycle of painted photocopies, the process that the archetypal-landscapes have sedimented since the early 80s within the activity and thought of the artist is renewed.  Images come from the continuous prolific documentation process that the artist daily builds in many different ways in order to form an archive.

In digital age all this does not seem something extravagant, it is not in fact; it is predominantly practice and daily exercise, a sort of military economy put into practice as a metabolic economy.

The artist documents the landscapes crossed as deep sediments, by means of images printed not in the retina, but in the bottom of the collective memory, meta-modern archetypes reduced to essential image and organically filtered by digestive processes turned by chemistries coming from human and mechanical metabolism. Photocopier is the ideal tool to lower the glossy quality of self-celebratory photography; it not only decomposes images into simplified  and easily accessible typographic screens, but also makes them exportable with a few Kb of transmission.

In “Paesaggi Ciclici Variati” the image from background  becames fundamental, and the painting is the fusion with the world of chemistry and physics moving the new final image towards a controlled creative incident. The difficult control of the processes put in place contrasts the pro-creative seriality of these new images that overlap in all the deep archetypal stratifications building their renewed mythological sense.

Come Sempre Dove Sai  is a work realized with a similar process, but with decidedly different results.  A simple pictorial formal system within the paper sheet scheme creates the necessary condition for determining a sky and a land, a horizon in which imperfections, stains and puddles of the china ink give a “chord note” to the loss of the painter within the picture.

The meticulous description of architectural infrastructures refers all that system to a portion of the earth’s crust from which emerge rigorous imperfections invented by humans. A simple brushstroke would be enough to wipe them out, an accident with the cup of ink to bury all that world under a mountain. 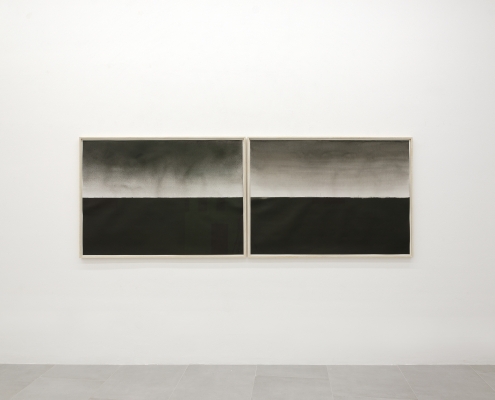 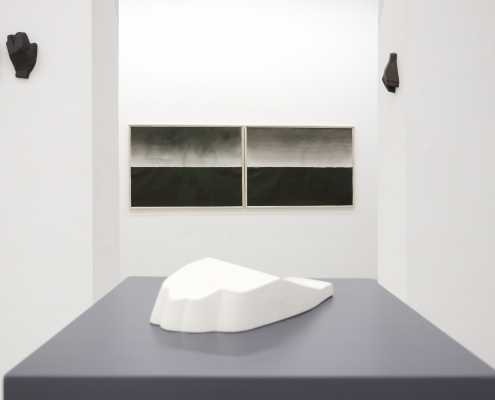 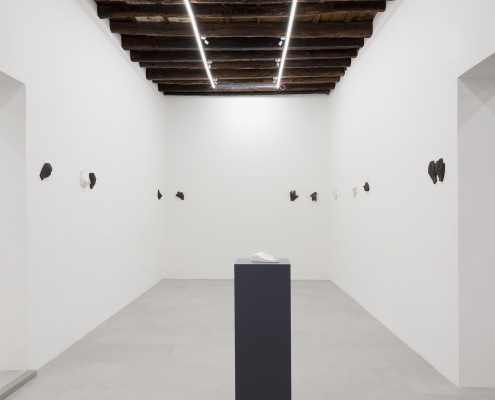 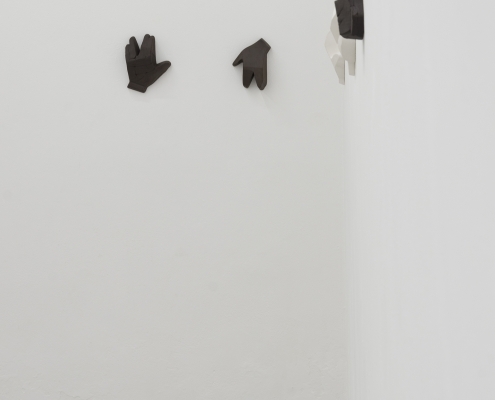 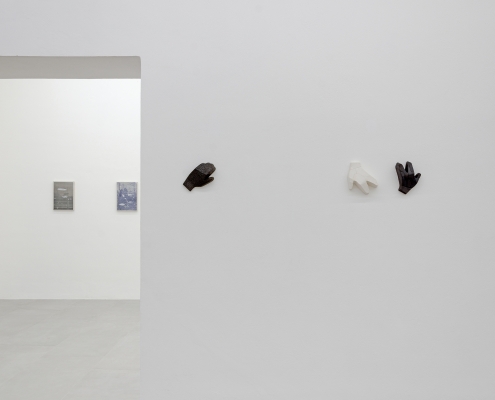 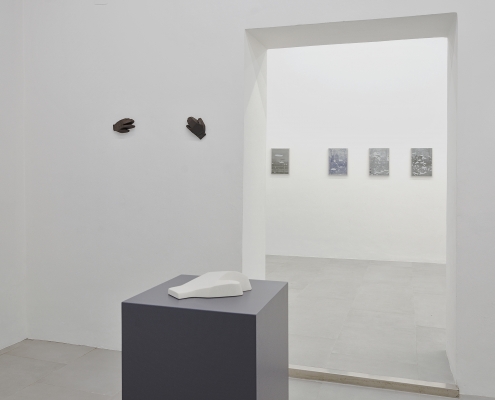 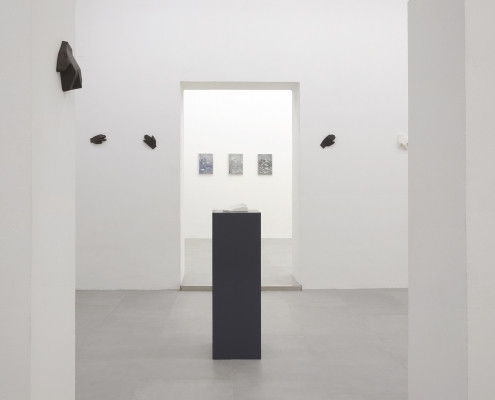 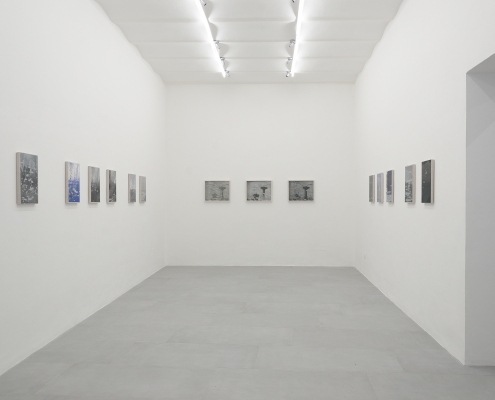 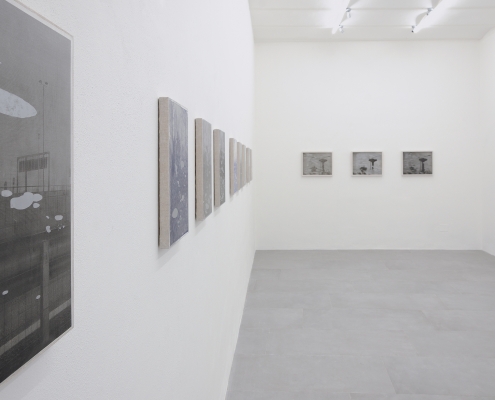 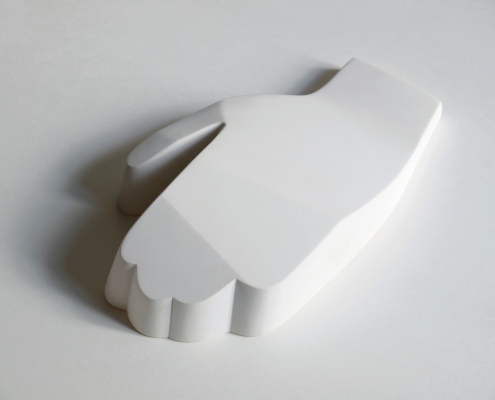 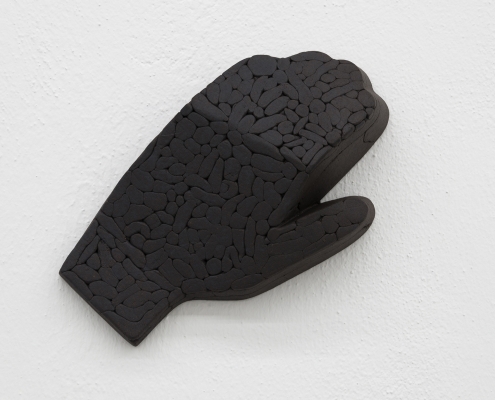 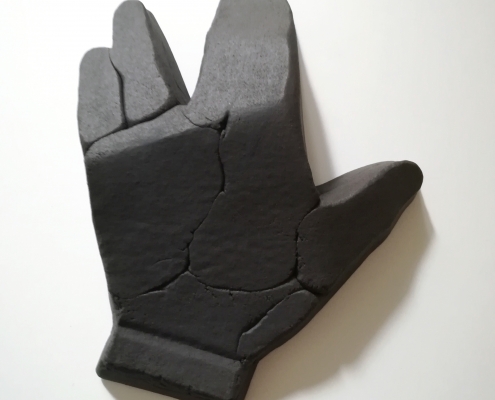 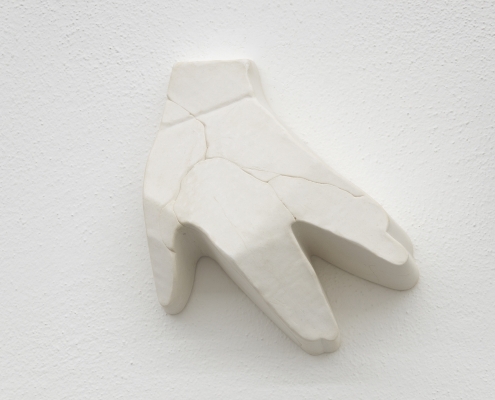 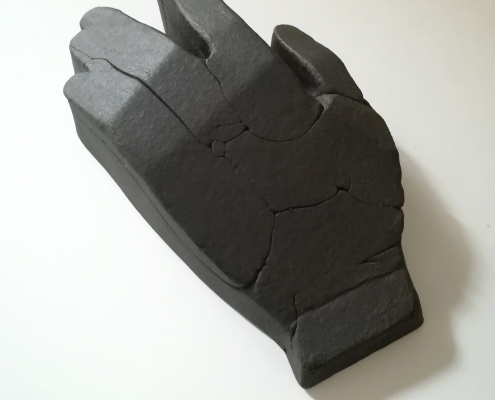 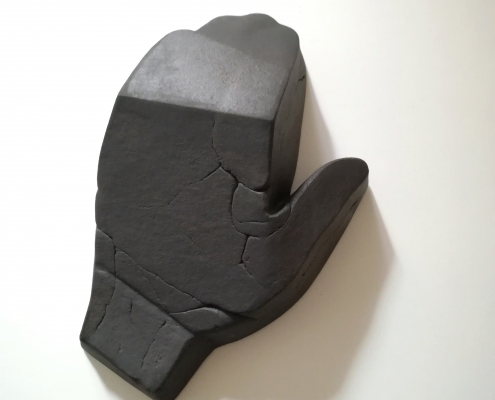 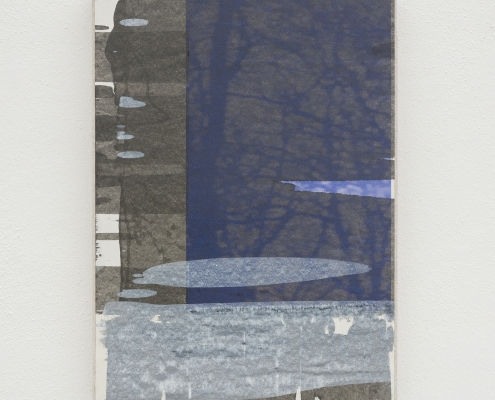 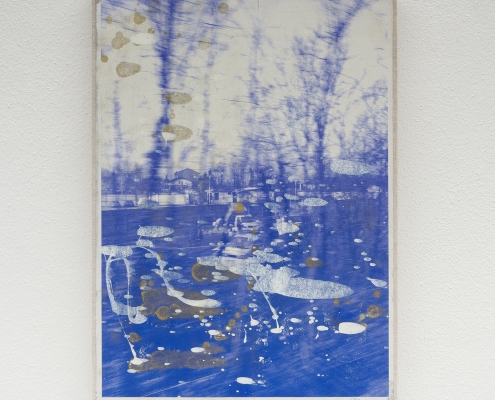 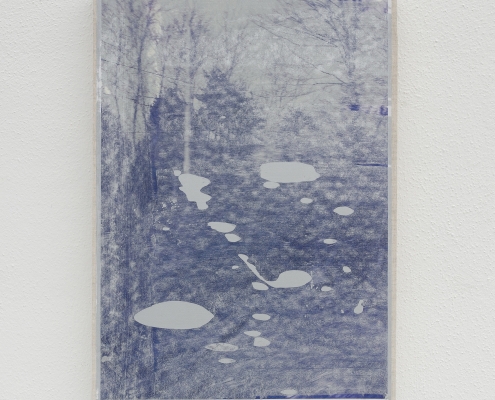 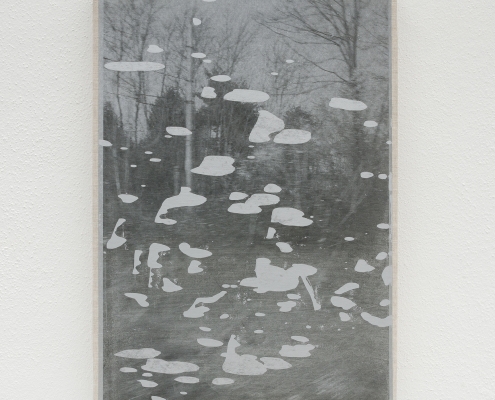 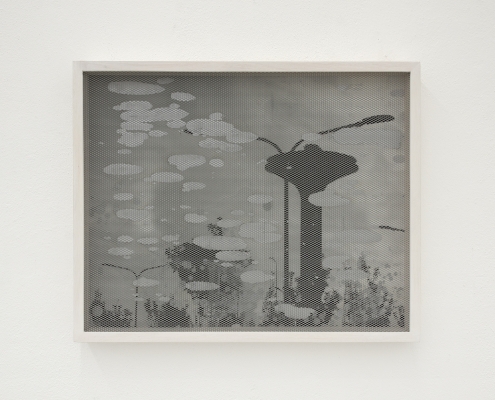 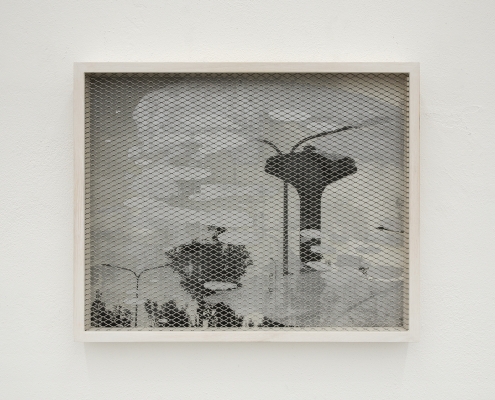 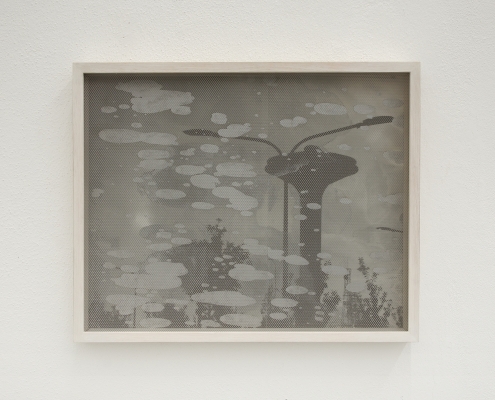